The immortal words of Yosser Hughes is an unconventional way for an economist to start a book, but then Danny Blanchflower has often found himself at odds with conventional economic theory. His new book 'Not Working: Where Have All the Good Jobs Gone' is no different. 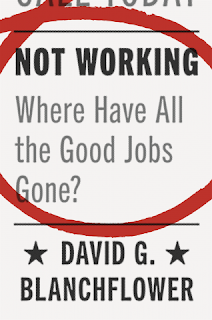 ﻿He argues that low earnings and the loss of high-paying jobs have led to feelings of instability, insecurity, and helplessness, especially for the less educated. Suicide rates in the United States are up 25% since 1999. He links this to the rise of right-wing populism and the failure of the elites to get economic policy right.

Like the author, one of the things I remember from A-Level economics is that 'full employment' doesn't mean everyone has a job. His core argument is that the traditional definition of full employment, below 4%, is no longer valid. Mainly because ﻿there are very high levels of “underemployment” prevailing around the world. In his words:

﻿“It is my contention that the natural rate of unemployment in most advanced countries is well below 3 percent. Employment rates and participation rates can rise, and unemployment rates can fall and by a lot. Globalization has weakened workers’ bargaining power. Migrant flows have put downward pressure on wages and greased the wheels of the labor market as their presence has increased mobility. The decline in the homeownership rate, which slows job creation and increases unemployment, has helped mobility.”

He points to the Bank of England’s consistent overestimates of wage growth as evidence that economists are basing their estimates on out of date 1970’s models. This leads to calls for rising interest rates to tackle a non-existent inflation problem.

Refreshingly, he doesn’t just give us an academic analysis of the problem (although there are all the charts and data you could want), he offers some solutions. These include:

﻿“We were never all in this together, and it is time we were. We are better together. People are hurting. The worry is that policymakers have not learned from their mistakes, but now they have little firepower to deal with the onset of the next economic crisis. The whole world wants a good job. Gizza job.”

Danny Blanchflower is not the only person to be writing about jobs and wages. The latest IFS study shows that between 1994 and 2017 there was an increase from 13% to 18% in the proportion of people in working households living in relative poverty (that’s an increase of 40%). A key driver of the rise has been increasing housing costs for low earning households, driven mainly by higher private and social rents. Also, earnings growth has been significantly slower for lower earners relative to higher earners.

Professor Peter Dolton has a handy guide to the UK labour market, which he has helpfully summarised into ten important facts. He also highlights public and private sector pay and the impact of changes to occupational pension schemes. He also says that around a third of graduates do not have graduate jobs reducing the earnings premium for a degree from 15% to just 6%. With a substantial impact on student loan repayment.

The lesson from all this is that work matters. Not just in the dry economic sense, but in terms of social policy. Some of the radical solutions may be challenged by traditional economists, but with their track record, we should move on, even if they can't.
Posted by Dave Watson at 13:46 No comments: