Still learning the lessons of PPP

Nearly thirty years after John Major’s government introduced the Private Finance Initiative (PFI), it is astonishing that we are still writing about and using this failed model of delivering public services.

Today, we are reminded by Audit Scotland, yet again, of the costs of using this model. It has been modified and rebranded many times over the years. In Scotland, the SNP government calls it Non-Profit Distributing (NPD) and the Hub Initiative, but these all come under the broad heading of Public Private Partnerships (PPP). In May last year, they announced another rebranding with the Mutual Investment Model (MIM). Another PPP scheme with many of the same problems, as is well covered in a recent Common Weal report.

I and others have written thousands of words on why this model doesn’t work. This archive page on the UNISON Scotland website covers many of my earlier publications. It reminds me that I even used to write a regular briefing called ‘PFI Illusion’. I have to say I didn't expect to be making the same points all these years later. Most recently, in Stockholm a couple of weeks ago.

I first became interested in PPP as a union organiser covering Lanarkshire Health Board in the 1990s. Two of the three acute hospitals were to be financed by PFI, and I recall a meeting with Lanarkshire MPs explaining why this was a bad idea. Particularly to John Smith MP, who as the MP for Monklands was likely to be the loser because his hospital didn’t have ring-fenced PFI funding.

The fact that PPP schemes are more expensive is not disputed as it once was. As today’s report reminds us even the SFT accepts this:

The costs are higher than this as the Audit Scotland report also confirms: "The Scottish public sector is contracted to pay a total of £40.1 billion in annual payments between 1998/99 and 2047/48 under current PFI, NPD and hub privately financed contracts. This is over four times the capital value of the assets developed” 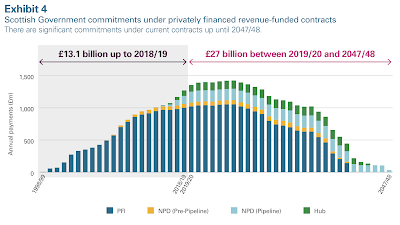 There are also plenty of other risks and problems associated with PPP schemes as the Edinburgh Sick Kids Hospital, and the collapse of Carillion has highlighted. As today's report also concedes projects that involve technology, legislation changes or complex service delivery are unlikely to be suitable. In practice, very few public services remain static for the 25-40 years of a typical PPP project.

The report also points to the reason governments of all colours have persisted. Devolved administrations have always had limited borrowing powers and therefore keeping borrowing off the public balance sheet is attractive. Few Scottish Government ministers in the early years of devolution thought PFI was a good idea, but it was in the parlance of the time, 'the only game in town'.  The Scottish Government now has much higher borrowing powers, which is why it uses PP less, but still insufficient for its capital programme. Hence the new MIM scheme, which they hope will keep these new schemes off-balance sheet.

Even the Tories have given up on PFI, not least because they can borrow very cheaply and they recognised that the projects were not delivering value for money. The solution for Scotland to go the same way is to give the Scottish Government prudential borrowing powers, ending the current limits. That would end the chase for off-balance-sheet financing and invest the savings in our crumbling infrastructure.

Passing on the Scottish healthcare experience

I am in Stockholm this week talking about health and care systems. Sweden has a healthcare system which is generally free at the point of use. However, there is greater local autonomy at the regional level than in the NHS and is increasingly adopting market-based systems with private sector providers, particularly in Stockholm.

Privatisation is being challenged in Stockholm, and I was invited to speak at a seminar to explain the Scottish experience. We moved from a command and control NHS model, to the internal market and now to a collaborative system. Having tried the market for around 15 years, they are interested in our experience and why we changed in the years after devolution. And why we have retained the model despite privatisation in England.

International comparisons in healthcare are notoriously difficult, and my approach is to explain the Scottish system, rather than suggest it should or could be copied directly. While Sweden starts with universal health care, the health challenges are very different to Scotland with our massive health inequalities. If only we had their more equal society, even if they are rightly concerned that the post-war gains are being eroded.

On systems, we can offer some relevant experience. The local newspaper was interviewing me outside a large new hospital built with private finance. Unsurprisingly, they have already discovered the cost of these projects and the creeping privatisation that comes with them. Scotland didn't have the cheap borrowing powers when most of our PPP hospitals were built. So why a country like Sweden, which can borrow for next to nothing would want to pay private sector rates is difficult to understand. Even the Tories have largely abandoned this model.

I outlined our experience of market-based systems in healthcare and the benefits of collaboration over competition. The key points include:

·       The private sector brings extra costs through private finance, profits and dividends.
·       To work, they need to create surplus capacity, which in a universal healthcare system has to be financed by the taxpayer.
·       Markets also have administrative and other costs. Prioritising marketing managers over nurses seems a poor choice at a time of scarce resources.
·       Collaboration enables the sharing of best practice. If one hospital innovates that is shared in a collaborative system, rather than patented in a private sector one.
·       National and local planning is difficult when hospitals and other care systems are competing. Not to mention the considerable procurement savings in an integrated system, most notably on drugs.

That is not to say that despite high user satisfaction there are no problems with NHS Scotland. Performance under budgetary, workforce and demand pressures are rightly highlighted in Parliament and elsewhere. We are not achieving a meaningful shift in resources from acute to primary care, and community engagement is limited, not least because of limited local democratic accountability. However, none of these issues would be addressed in a market-based system.

I also spent some time explaining the problems we face integrating health and social care. Ironically, many of these exist because we retain the use of market mechanisms in social care. Most Scandinavian countries have fewer problems with this because these services are integrated with primary care in local government.

So, while the Scottish healthcare system is far from perfect, it does at least avoid the disaster that marketisation brings. It is up to the Swedes to make their own decisions, but at least they can learn from those who have been there and won’t be returning anytime soon.
Posted by Dave Watson at 08:00 No comments: