Pressures on public spending in Scotland

The Scottish budget has fallen 9%, in real terms, from £31.9bn in 2009/10 to £28.9bn in 2014/15 and is expected to reduce further. Audit Scotland believes public bodies have coped well so far, but face increasingly difficult choices in reducing spending while maintaining service standards and meeting rising demand. There is limited evidence of longer-term financial planning. Plans generally focus on the short to medium term up to five years.

This chart illustrates the shift from revenue to capital. 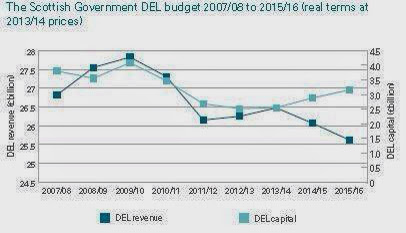 The Scottish Government also has a substantial PPP programme, not something they are keen to highlight. As UNISON has repeatedly pointed out, these projects create longer-term financial commitments and to reduce flexibility in how future revenue budgets can be used. This report notes that since 2010, contracts for projects with a value of around £1.7 billion have been agreed using revenue-financed methods with a further £1.7 billion planned for future years.

The much vaunted ‘ring fencing’ of health spending has never quite lived up to the headline, largely due to above inflation costs in this sector. By 2015/16 even this protection goes, with the health budget reducing by £73 million (1%). Area health board budgets are increasing by 1%, while special health boards are cut by 1% and central spending is cut by 3%.

The pressures on public bodies are not simply financial. This info graphic illustrates the ongoing pressures very well. 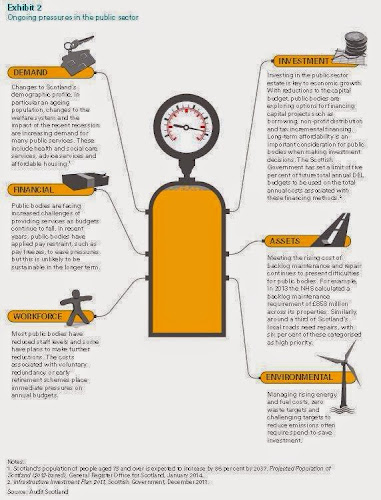 The second part of the report makes recommendations as to how public bodies might mitigate the pressures. More data, focusing budgeting on priorities, a long term approach to financial planning and greater scrutiny are all very worthwhile. However, they are at best a sticking plaster on a pressure cooker, and that never ends well.

Posted with Blogsy
Posted by Dave Watson at 13:13

Email ThisBlogThis!Share to TwitterShare to FacebookShare to Pinterest
Labels: Finance