This is Challenge Poverty Week in Scotland. There will be a series of events culminating in a march and rally In Glasgow on Saturday.

The week started with the Poverty Alliance conference today. I was contributing to the final session and my focus was on the importance of reframing the narrative in the debate around poverty.

For Cameron, it is all about the ‘strivers, not the skivers’. This is the strategy and language of despots and the far right for centuries. Find a minority to blame to distract the majority from the real problems in our society. A problem you could do something about, but choose instead to defend the vested interests of your class.

We need to reframe the narrative in opposition to welfare cuts and the political myth making that unfairly blames poverty on those struggling. The percentage of households below a minimum standard of living has doubled over the last 30 years.

We can start by pointing out that more than half of those forced to claim benefits are the very ‘strivers’ that Cameron claims to represent. 52% of working age adults in poverty were living in households where at least one adult was in employment, as were 59% of children in poverty.

This has happened because the economy has seen a big shift from wages to profits. You have to go back to the 1860’s for a pay squeeze as long as this one. If the wage bill had just kept up with inflation there would be £5bn more spending power in the Scottish economy.

As we highlight in a UNISON Scotland report published today on wages, workers are struggling to meet even basic bills. Since 2007 the average rent for a Council House has increased by 26% and in the same time the wages of a Council Worker has increased by 8.3%. In today’s report we give a voice to many of our members who describe in their own words how they are struggling to make ends meet.

Families have been plugging the gap by using savings or getting into debt. 30% of families say they have less than £500 put away, compared with just 14% in 2013. A deeply indebted economy may be a political strategy to get Cameron to the next General Election, but there will be a serious hangover after it.

Even among those suffering, the pain is not evenly spread. Women in low pay have a pay gap of 34.2% and young workers classed as low paid has more than tripled over the past four decades.

Of course there is a minority that Cameron is not blaming – the 1% who are doing very nicely thank you.

The wealth of the richest 1,000 people in Britain doubled to £519 billion since 2009, about two and a half times the annual deficit. Today’s IDS study of FTSE 100 Directors shows that they had a 21% pay rise last year and now earn 120 times the average full time worker. In 2000 that ratio was 40 times. NHS workers in England are striking today, just get the Government to pay their own measly 1% pay policy.

And this isn’t just about Russian oligarchs buying up mansions in Knightsbridge. It’s here in Scotland. An Edinburgh fund manager reported recently that 7 directors earned an average of £2.5m each and settled a post retirement benefit on a former director of £31m.

There are some positive signs that we are not the only people who recognise the need to reframe the debate. The Pope, Governor of the Bank of England, even the CBI have said something about low wages and the damage it is doing to our economy. We may not get the bankers to even read The Spirit Level, but even they can see that they can't hide behind electric fences all the time. They can pay to get their bins uplifted, but their neighbours rats will still get under the fence.

So, lets build on that growing awareness to build a broad coalition around a new narrative and some practical solutions. By all means let's engage with the Smith Commission to strengthen devolution, but then focus on what we can achieve at UK, Scottish and local levels. At today's conference there was a really useful discussion about how we can harness the energy of the referendum debate to deliver social justice.

My frustration with the current political debate is that we need a little less rhetoric, telling people what they want to hear, and more action. For example, everyone agrees that the living wage can be expanded through procurement, but months after the Act was passed we haven't even begun to draft the statutory guidance. Meanwhile officials come up with every excuse for not taking action.

The best engagement events during the referendum campaign were not the 'shouty' hustings, but rather the genuine conversations. Educate and agitate is an old trade union adage, but if you explain the issues to people, they are much more willing to consider and come up with different and challenging solutions.

A different narrative in the debate around poverty is possible. We can win the arguments, persuade a majority that a more equal society is better for everyone, not just the poor. I am less interested in the 45 or the 55, than getting the 99%, who would benefit on our side. If we can do that we have a movement that really can create a just Scotland. 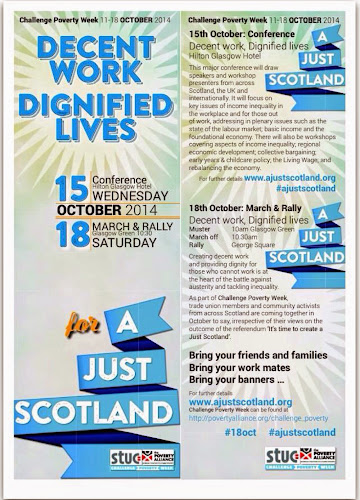 Posted with Blogsy
Posted by Dave Watson at 18:14