I was at the UNISON Labour Link hustings for the UK Labour Leadership today in Manchester. With our focus on the Scottish leadership election's earlier timetable, this was my first real opportunity to listen to the candidates.

Andy Burnham's pitch was that he was the man to stand up for Labour values and to take the fight to the Tory government. Citing his record on the NHS, where Labour had a clear lead, opposing privatisation and his record on improving industrial relations in the NHS. He would repeal the latest planned Tory anti union laws arguing that trade unions provide the 'cleanest money in politics'.

His positive policy proposals included bringing social care into the NHS and while supporting greater home ownership, any right to buy has to include like for like replacement in law. He felt Labour did spend to much when the economy was growing, but didn't say what spending he would have held back.

On Scotland, he argued the party has had a grudging approach to devolution. Labour is too Westminster centric and that's a culture that has to change. He supported a more autonomous Scottish Labour Party, although didn't appear to understand that policy and organisation over devolved issues is already decided in Scotland. He appears to be arguing that the solutions are culture and behaviour change, rather than structural.

His final pitch was that the Westminster elite doesn't understand the lives of people and as a consequence the voters have lost their emotional contact with Labour. Home ownership, comprehensive education and quality care are his key issues. Support people's aspiration but leave no one behind.

Liz Kendall had warm words about the work of public service workers and the public service ethos. She was supportive of UNISON Ethical Care Charter and opposed to Tory health reforms in England. She was opposed to the Tory housing association right to buy that has no like for like replacement. She wants a shift from housing benefit to building houses. 'Benefits to bricks' is a good slogan but she needs to explain how she would achieve such a transition.

Her key theme was regaining people's trust on the economy. The Low Pay Commission remit should change to look at how move to the living wage sector by sector. Devolving power to cities and regions to cure short termism and create high skill, high wage economy. Other than learning from the German economy, it was again a little light on solutions. Her position on sound public finances sounded very like austerity lite.

On Scotland, she doesn't support an independent Scottish Labour Party. Instead supporting a more federal party in Scotland and the English regions. She argued that Scottish Labour had long term problems prior to the referendum rather than focusing on the Better Together campaign. Labour needs to present an optimistic picture of the union.

Her final pitch was that to win in 2020, Labour needs to change and she is the change candidate. This involves a positive alternative of a better life in a country where the chances of succeeding don't depend on birth, race or gender. Sound public finances and devolving power are her key elements.

Jeremy Corbyn had the best jokes, even if some were a bit laboured. He also had the strongest policy pitch, less vagueness, particularly on trade union rights and TTIP. Organisationally, he wants to make Labour the centre of radical political activity. His main pitch was that Labour lost the election because it didn't offer an alternative to austerity. He criticised last Labour government for PFI contracts and would bring them back in house with cheaper direct borrowing. He would retain public ownership of banks and make them work for the real economy. He understood the importance of national collective bargaining to raising wages and proposed a cabinet minister for labour.

He supports a constitutional convention to look at devolved powers, but warned about the poison chalice when powers come with cuts - 'beware of Tories bearing gifts!' If right to buy in housing associations why not right to buy from private landlords. He also supports rent controls.

He was prepared to consider a federal structure for the party and clearly understood the political mistakes of the 'Better Together' campaign. He would expose the consequences of the SNP's full fiscal austerity, rail and ferry privatisation.

The contrast with his final pitch was that he didn't make a 'presidential' case for his candidature. Using Tony Benn's the 'best leaders are the ones you don't remember because we did it ourselves'. He would focus on ending austerity and tackling inequality and would go after those who caused the crash not blame migrants, poor and welfare claimants.

Yvette Cooper's focus was on what Labour needs to do to win. She explicitly defended Labour's record arguing that it wasn't too many public service workers that caused the crash, it was the bankers. Although she accepted Labour made a mistake over the lack of banking regulation.

She opposed the planned Tory union laws and cuts to tax credits. She supported the living wage and public sector pay increases with a gender audit for all policies. She also argued Labour was not ambitious enough on housing, we should be building 300,000 a year. She would tackle UKIP on their policy positions and take a strong position on the exploitation of immigrant workers, but "when you hear racism you should always call it out". She understood welfare to work but based on her personal experience she won't demonise benefit claimants.

On Scotland, she supported more party devolution including policy, but not an independent Scottish Labour Party as contrary to solidarity principle.

Her final pitch was that the voters are looking for someone who can be Prime Minister. We need head and heart - voters need to trust us to deliver. Cameron clearly has a 'woman problem' so why not elect Labour's first women leader.

While today's hustings was helpful, I'm not sure it took me much further in deciding who to support.

Liz Kendall was stronger on values today than I expected, but she still leaves me with the impression that she carries those values lightly. Her policy pitch sounds very general and appears to lack substance. Jeremy Corbyn had the policy lines that I support and strong Labour values. Most importantly, he understands the need to challenge austerity. However, I recognise that his presentational style could be a challenge in modern elections.

Andy Burnham not only has strong presentational skills, but importantly, he also sounds authentic. He has a strong analysis of what's wrong, but weaker and vaguer on solutions. It may be that he is trying to build too big a coalition and risks losing a distinctive position. Yvette Cooper was also strong on presentation and sounds authentic. Her policy pitch was stronger than I expected, but still vague on some of the more difficult issues.

I'm afraid none of the candidates had a good grasp of the position in Scotland. I'm not sure most of them even understand the current party constitution, let alone what changes are necessary. The Deputy Leader candidates weren't any better in the afternoon.

UNISON is going to take some time before reaching a decision on who to support later this month. That gives me a bit more time too. Today edged me in a direction, but I wasn't bowled over. 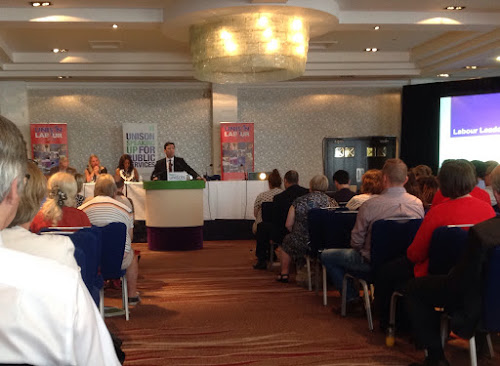