The Scottish Budget is debated at Stage 3 in parliament tomorrow. While there is plenty of pain for all public services, it is local government that is bearing the brunt of austerity in Scotland.

In our MSP briefing, I set out the implications of the budget for all public services - little of it is positive. However, the focus of the debate inside and outside parliament has rightly been on the local government budget settlement.

The budget allocation to local government in 2016-17 will be £10,152.3m, a substantial reduction on the 2015-16 allocation of £10,756.7m, even allowing for some reprofiling of capital expenditure. Within this allocation, the combined General Resource Grant + Non-Domestic Rates Income figure, which is used to calculate local government’s total revenue settlement, falls by 5.2%, or more than £500 million, in real terms (GDP deflator - inflation). The equivalent figure in cash terms is a reduction of 3.6%, or £349m. Both numbers are often bandied about, so it is important to differentiate them.

It is worth mentioning that the income from non-domestic rates is the second largest source of revenue after the Scottish Rate of Income Tax (SRIT). This year the estimated revenue is down by £31m, 2.8% in real terms. This decrease does not reflect the Scottish Government’s optimism about economic growth and in previous years the estimated income has risen considerably, e.g. by £150m last year. We can only hope that this isn’t a backdoor way of creating an under spend to the Scottish Government budget.

Scottish ministers often argue that local government has had a fair share of the Scottish budget over the years. This is a dubious claim when you consider that councils are the only main spending portfolio to have suffered a cash cut. However, it certainly isn’t true this coming year. Local government’s percentage share of the Scottish budget also falls 1.7% from 32.3% to 30.6% in 2016-17 (although on a like for like comparison, the percentage share falls by 1.1%).

If we take a slightly longer look, we can see that the Scottish Government is cutting councils more than itself. Since the 2013-14 transfer of police and fire, the local government settlement has fallen by 1.9% in real terms (-£200.9m), whereas the Scottish Government’s DEL+NDRI has increased by 3.2% in real terms (+£1,018.8m). This chart from SPICe illustrates this point. 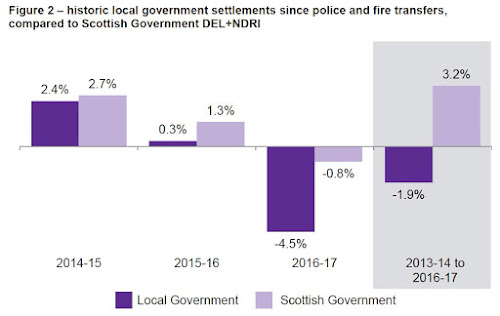 In addition, councils have been blocked from increasing the Council Tax. This brings the total cost of the freeze in 2015-16 to £630m, and the total cumulative cost from 2008-09 to 2016-17 to £3,150m. Just imagine how many services and jobs could have been saved with this resource.

COSLA has estimated that this settlement will result in 15,000 job losses. It is difficult to estimate actual losses because it depends on the services councils decide to cut and how they use reserves and other financial instruments. Unavoidable commitments, such as employer National Insurance contribution increases (£125m for councils alone), will add to the pressure. Even if 15,000 is at the higher end, we know for certain that of the 50,000 jobs lost in devolved services since the crash, 40,000 of those are in local government. That certainly feels like councils are taking the brunt of austerity.

As the First Minister has fairly pointed out, unless you increase the overall budget available, protecting one service area inevitably means cuts to another. It used to be the case that the Scottish Parliament didn’t decide the size of the budget; it was largely limited to how it is divided up. That is no longer the case, because Parliament now has the Scottish Rate of Income Tax. We agree that the Calman powers are flawed, but they are still progressive and there will be an opportunity to make it more progressive when the new Scotland Bill’s powers are implemented.

I fully accept that the root cause of these cuts is the UK Government’s ideological attack on public services. However, devolution is about doing things differently in Scotland. We have the powers to mitigate austerity as we outlined in our report last year and by using the new tax powers. MSP’s should choose to combat austerity, not simply pass it on to community services. 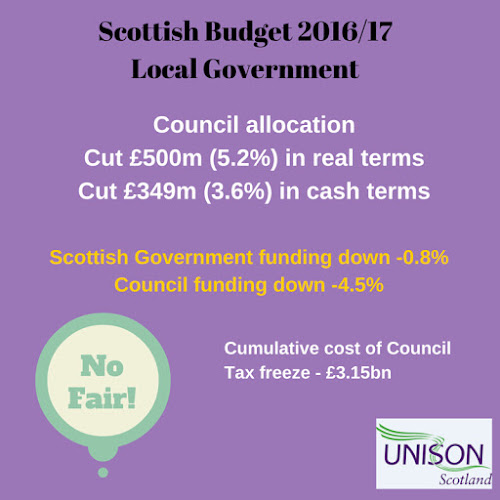