How we can finance the future

I am in Cape Town, South Africa, this week speaking at the global summit, 'Financing the Future'.

This is a gathering of the global divest/invest movement. The aim is to shift finance flows away from fossil fuels and into climate solutions as the right way to 'finance the future’. The conference is hearing from experts and campaigners who describe why these approaches are indispensable to solving the climate crisis and ensuring universal access to clean, reliable, affordable sources of energy.

There have been some inspirational contributions, including the deCOALonize campaign in Kenya who took on huge corporations, Chinese investors and the government to stop the development of a coal industry in Kenya. Or the Dakota Sioux who opposed the oil pipeline that threatens their environment. 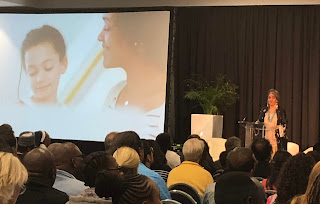 There was also inspiration and support for what young people have achieved with their campaigns, including the 20 September climate strike. Back home, today’s Scottish Household Survey highlights almost two-thirds of adults viewed climate change as an immediate and urgent problem. The greatest increase in concern is among adults aged 16-24, rising from 38% in 2013 to 67% in 2018.

However, there is plenty of hard-headed analysis as well. The movement has just passed $11 trillion of managed investment funds committed to divestment from fossil fuels. I was impressed by the understanding that this not only an environmental issue. It is just as much about economic and human rights, about global justice.

I talked about Scotland's cross-party political commitment to tackle climate action. That ambition has resulted in good progress in decarbonising our electricity generation, although we remain in the middle of the emissions league table because of limited work on transport and heat.

I also referenced the importance of Just Transition. Sadly, having to point out that as you travel across Scotland, you pass thousands of wind turbines, precious few of which were manufactured in Scotland. We have plenty of experience in our coal and steel communities of bad transitions – the consequences of which remain with us today. Scotland’s Just Transition Commission is very welcome, but it must be more than a 'good intentions' commission. There has to be a real route map, with a jobs guarantee and a commitment to solutions that eliminate poverty and inequality. As Sam Smith from the ITUC put it: “a world where emissions are down, but actually people have decent and better lives.”.

My contribution also covered the practical issues associated with pension divestment and investment. Shifting our pensions funds into a long-term horizon - to recognise that fiduciary duty is no longer an excuse for inaction when the evidence is clear that fossil fuels are not a viable investment. I highlighted the practical measures in the UNISON guide as a template for pension trustees to not only divest but also invest in a different future.

Being in Africa gives you a different perspective on these issues. Two-thirds of Africa doesn’t have grid access to electricity and little prospect of the marketised electricity system delivering much improvement. However, there are innovative schemes using solar and mini-grids in countries like Zambia and Nigeria.

It was also interesting to talk to South African unions and environmental groups about coal mining in that country, where Just Transition hasn't got much beyond the aspiration stage. A story involving Malawi illustrates other practical challenges. The energy minister told one delegate that he would love to build renewable electricity generation, but the only financing offer he had was from the Chinese to build a coal plant!

There was a lot of discussion about alternative investment. For example, mini-grids in Nigeria face 35% interest rates, staggering for someone coming from Scotland. There are probably not enough investment opportunities in renewables for constrained investors like pension funds, who need scale, low risk and have limited expertise. That’s why other socially useful investment is equally important like housing and other forms of infrastructure.

Overall, there is plenty of inspiration for change here, and some fantastic projects and campaigns are going on worldwide. It seems appropriate being in South Africa to end with a Nelson Mandela quote: "It always seems impossible until it's done.”