The case for hydrogen

When it comes to renewable energy, there is a large degree of consensus on the technologies that should feature in our energy strategies. The differences are most apparent around nuclear power, but also carbon capture and storage (CCS) and hydrogen - both of which are important elements in the Scottish Government’s energy strategy.

I recently completed an ESG project for a pension fund, which raised specific questions around investments in hydrogen.

The history of renewable technology development in Scotland and the UK is riddled with missed opportunities. We have often had a technology lead, before squandering it to others, who then gain the commercial and jobs advantage. CCS, wind power and batteries are just some examples. Many believe that we could make the same mistake with hydrogen.

Hydrogen can be produced from a variety of domestic resources, such as natural gas, nuclear power, biomass, and renewable power like solar and wind. The most common methods of producing hydrogen are natural gas reforming (a thermal process), and electrolysis. It is the former, often called ‘Blue’ hydrogen, which is opposed by some environmental groups because it is not totally carbon-free and typically uses CCS technology. The latter, ‘Green’ hydrogen, is made from renewable sources, although it is more expensive to produce. 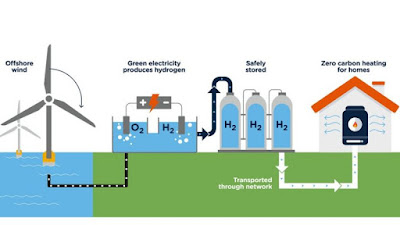 The EU has a strategy that plans to produce 10 million tons of H2 by 2030, and Germany is adopting a hydrogen strategy that aims to make them a world leader. The UK enjoys a big advantage with this technology given our wind resources, and the intermittent nature of these renewables can be turned into hydrogen, doing away with expensive constraint payments. ScottishPower is building a plant to do this close to their Whitelee wind farm near Glasgow, which could supply hydrogen to Glasgow buses and trains. The first trains are being trialled and manufactured in the UK as part of the Breeze hydrogen plan. 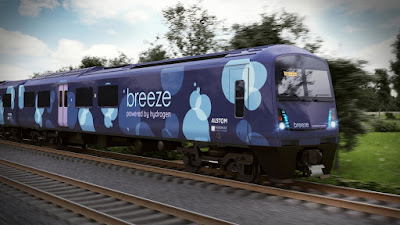 Using CCS, we can turn the emissions from our heavy industries into hydrogen as they transition into cleaner technologies. The Wood Group is preparing a roadmap for how Scotland’s gas network system will need to be adapted if the country is to make the most of the potential of technologies such as hydrogen fuel and carbon capture and storage. Hubs could include the North-East and Grangemouth, making a real contribution to a Just Transition.

We also have several smaller companies operating in this field, which need help to grow. Some of the bigger players, like BP, are also seeking early positions in hydrogen and CCS, although there is some way to go before they can demonstrate that this is more than a publicity stunt. A study for RenewableUK, says the renewables sector is confident that it can repeat the success of the offshore wind industry by driving down the cost of green hydrogen over the next decade. However, this will only be a ‘success’ if this time we retain supply chain jobs in the UK.

Experience shows that growth won’t happen without government intervention, which brings together the supply and demand-side players and provides investment. The Westminster All Party Parliamentary Group on Hydrogen has called on the UK Government to urgently set out a UK hydrogen strategy or risk, yet again, falling behind. The Committee for Climate Change has estimated that a developed hydrogen system could eventually contribute a similar amount of energy to the UK economy as the electricity industry does today. National Grid says that cutting the UK’s emissions to net-zero will ‘require’ hydrogen, as it could be used to decarbonise parts of the economy that other options cannot reach.

Scottish based Logan Energy has secured UK Government funding to supply hydrogen refuelling stations in Teesside, and hopes to extend these across the UK, with worldwide export potential. They have built the first public hydrogen refuelling station in the central belt and are planning more. Green hydrogen production company Ryse has acquired Northern Ireland-based manufacturer Wrightbus and envisages around 3,000 hydrogen buses with a production facility outside Glasgow. First Aberdeen is to run 15 hydrogen-powered double-deckers supplied by Wrightbus as part of an £8.3 million project been funded by Aberdeen City Council, the Scottish Government, and the EU. We also have the prospect of the first hydrogen-powered ferries in the world operating in Orkney.

Hydrogen has the potential to be an important game-changer in delivering net-zero emissions. Powering transport and replacing gas as a source of heating, two areas where we need to make faster progress. We mustn’t let the excellent work being done in Scotland and the UK go to waste as we have done in the past.