Since the publication of the Christie Commission report five years ago, public sector reform has been largely piecemeal and driven by austerity cuts. The debate can also drift into a contest between localism and centralism. In a paper for the Reid Foundation, I argue for a holistic approach to reform with services built upwards from integrated local delivery, while recognising that in a small country there is an important role for the centre.

The paper starts by making the case for public services as the measure of a civilised society, but also as the basis of a more equitable society and a stronger economy. I then describe the many challenges facing Scotland’s public services – primarily financial, but also the impact of our deeply unequal society and demographic change.

The public service workforce has often been an afterthought in service reform. This is a serious oversight given that workers, directly or indirectly employed, are central to service delivery. I describe the impact of austerity on the workforce and how a new approach, built around a national workforce framework, could avoid unnecessary duplication and support integration.

Scotland’s approach to public service reform has taken a different route to the rest of the UK since devolution. I describe the various initiatives including the Christie Commission report and its patchy implementation. Reforms elsewhere are also covered, along with ideas generated by academics and think tanks across the UK and in Europe. 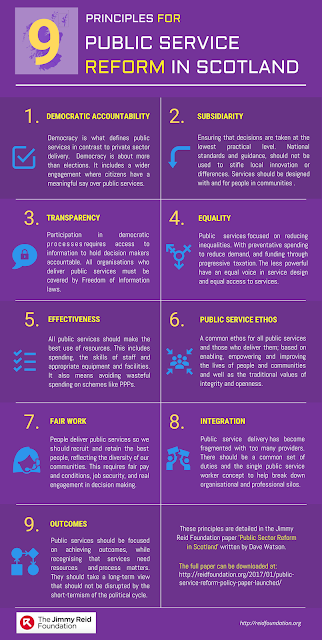 A new approach to public service reform has to be based on a set of underlying principles. I suggest nine principles (see infographic) that all reform proposals should be tested against.

How we finance public services is a crucial issue. This involves difficult discussions around taxation, now that we have significant devolved powers. It includes a better understanding of what we mean by universalism and the importance of preventative spending. Local taxation also needs radical reform, not further tinkering. We also need a new approach to funding capital investment, away from ruinously expensive PPP schemes.

Most reform measures start with central government and then consider what powers to devolve. I propose an alternative approach that starts with recognisable communities and builds service delivery from the bottom up. Community hubs could physically site services together, breaking down the silo mentality that Christie identified. Service design would be done with citizens and front line staff adopting ideas from Systems Thinking, The Enabling State, Participatory Budgeting and Co-operative councils. This would then form the basis for a debate on the best structure for local government, the NHS and services delivered by national bodies, ensuring democratic accountability.

Where I differ with pure localism is in advocating an important role for central government - not in directing service delivery from the centre, but focusing on strategic outcomes. I would even go somewhat further than that. In a country the size of Scotland there is no value in unnecessary duplication and difference for the sake of it. National frameworks would allow local services to focus on service design without reinventing the wheel. A national workforce framework is a good example of this, possibly leading to the concept of a single public service worker.

The scale of the challenges facing public services in Scotland is immense. If they were challenging five years ago when the Christie Commission reported, they are even more so now. This paper argues that there is balanced approach to reform in a small country. We do that by building public services from the bottom up based on the principle of subsidiarity, with integration, democracy and transparency at the core of delivery. The role of central government should be to set the strategic direction and agree frameworks that allow the local to focus on what matters.

I don’t expect everyone to agree with all I say in what is not a short read! I also accept that the solutions need further development. However, I hope it’s a helpful contribution to the debate that attempts to identify solutions to the challenges facing our vital public services.

REID FOUNDATION - PUBLIC SERVICE REFORM IN SCOTLAND
A major new policy paper by Dave Watson of UNISON.
The Paper will be launched at a seminar on Friday 20 January at 10am, free to attend but registration is essential.   Register online at https://www.eventbrite.com/e/public-service-reform-in-scotland-launch-of-new-policy-paper-by-dave-watson-tickets-30926610324
The venue is Lecture Theatre 2, Appleton Tower, University of Edinburgh, 11 Crichton Street, EH8 9LE http://www.ed.ac.uk/maps/maps?building=appleton-tower
Registration tea/coffee 10.00/30 and event begins 10.30am-12.30pm.
Chairperson: Professor James Mitchell; Speaker: Dave Watson: Questions and discussion
The Foundation gratefully acknowledge the support given by the University Academy of Government in the organisation of the seminar
Posted by Dave Watson at 16:27