It’s time to get radical if we are to address the vast challenges facing Scotland and the rest of the UK.

Let’s start by understanding the scale of the problems facing us. In my New Year blog, I suggested four new ‘giants’:

I have been working on the Scottish Labour Party’s policy development process for the 2021 manifesto. The first stage consultation paper highlights a large number of challenges and invites members and stakeholders to suggest ideas that will develop Labour’s vision of real change. 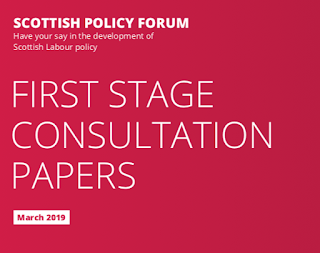 I would argue that while Scotland has adopted some progressive policies, certainly compared with the UK government, they have all too often focused on process rather than radical action. This is the ‘safe' middle ground that the US Congresswoman Alexandria Ocasio-Cortez recently challenged. She said:

“Moderate is not a stance. It’s just an attitude towards life of, like, ‘meh.’ We’ve become so cynical, that we view … cynicism as an intellectually superior attitude, and we view ambition as youthful naivety when ... the greatest things we have ever accomplished as a society have been ambitious acts of vision. The ‘meh’ is worshipped now. For what?”

There is nothing ‘moderate' about the vast inequalities in Scotland, homeless people on our streets, the growing mental health crisis, climate change or the uncontrolled power of global corporations. The establishment tells us to be pragmatic and stick to incrementalism - when what is needed is systemic change.

It has taken today’s children to demand that my generation takes climate change seriously. As Phil McDuff argues, climate change is the result of our economic and industrial system – we need to re-evaluate our relationship to ownership, work and capital fundamentally.
I wouldn’t normally regard the Scottish Land Commission as a body ready to consider radical solutions. However, today’s report says that most of the disadvantages of Scotland's current pattern of land ownership are related to a concentration of decision-making power. It noted that in some parts, that hampered economic development and caused serious and long-term harm to communities and there was an "urgent need" for mechanisms to protect fragile communities from the "irresponsible exercise of power".
Progressive think tanks like the New Economics Foundation have long argued that we need a new approach to local economies that challenge the economic orthodoxy of inward investment. Last week they built on their long-term criticism of personal allowances with a proposal that replaces those allowances with a weekly national allowance.
Radical change isn't easy for political parties. The two biggest Scottish spending budgets that could be shifted by preventative spending are acute hospitals and prisons. However, a minority of voters understand the case for moving resources and are much more likely to be concerned about ward closures and reductions in the use of custodial sentences.
The typically dismal mainstream media reaction to Richard Leonard’s conference speech on free bus travel reflects the establishment’s need to stamp on radical change. The problem they face is that policies like this are actually growing in popularity. Radical progressives are having an impact far higher than their ‘incrementalist’ peers. Just look at the way Alexandria Ocasio-Cortez’s Green New Deal has started a meaningful discussion about climate change in the USA.


So, radical change isn’t easy, but the challenges that face us deserve radical solutions. And more and more people, of all ages, are recognising that reality.
Posted by Dave Watson at 13:46 No comments:

Pension funds need to consider the long-term impacts of their investment decisions. That is particularly obvious when it comes to fossil fuel companies. The evidence is unequivocal that companies cannot burn all their reserves if the world is to avoid catastrophic climate change.

That analysis doesn’t come from a Friends of the Earth or Greenpeace briefing – it is the view of Mark Carney, the governor of the Bank of England. Others have made the moral case, he highlights the financial risks of investments in companies who could find their assets ‘stranded’ as the world acts to tackle climate change.

Last night, I was speaking at a seminar chaired by the Deputy Mayor of London, in an impressive venue, the Living Room at City Hall. I was outlining a trade union perspective on divesting fossil fuel investments from my experience in local government pension funds.

Some London funds have already taken this decision, and others are quietly moving away from these investments. The seminar heard from Southwark Council who are one of several in London who have clear policies. Leadership from Mayor and GLA is crucial. The Sainsbury Foundation also spoke at the seminar, highlighting their helpful guide to divesting and reinvesting.

It is a sign of progress that the case for divestment as set out by Platform London, is broadly accepted. The discussion in the panel session and workgroups was around the practicalities.

I outlined the importance of action on climate change and the role of the public sector in leading by example. I described the public sector duties in the Climate Change (Scotland) Act 2009 to reduce emissions, introduce adaption measures and work sustainably. This legislation had significant cross-party support in Scotland and is currently being updated in a Bill being considered by the Scottish Parliament.

While the ambition in Scotland to tackle climate change is undeniable, action on fossil fuel divestment in Scotland has been slow. This is despite national and local campaigns and even resolutions passed by councils who are the administering authorities for pension funds. Presentations have been made to Pension Boards, and a parliamentary inquiry by the Local Government Committee highlighted the issue.

There are some barriers to action by pension funds. Officials tend to adopt a conservative approach to change and dislike what they perceive to be political considerations. Too many funds are small and don't have the expertise to consider this issue thoroughly. This is one of the reasons why Scotland is looking at a structural review, which would enable funds to develop a team with the necessary expertise.

Fiduciary duty is often wheeled out as a last-ditch defence, and it was raised by several speakers last night. I wrote a briefing on this issue for UNISON in 2015, which explains why this shouldn’t be an issue. It cites Scottish and English Law Commission reports and an opinion from Nigel Griffiths QC. In essence, pension funds are entitled to take environmental and social issues into account so long as they do not risk material financial detriment to the fund.

Also, pension funds are not exempt from the public law duties that apply to the administering authorities. All investments involve a degree of risk, so fiduciary duty doesn't mean taking no risks. Ethical investment is rarely any riskier than other investments, and legal challenges are rare so long as funds follow a proper process.

UNISON has also produced a useful guide on how to divest from fossil fuels. That starts with gathering information on investments before influencing the fund's investment strategy. It is import to emphasise that the policy should not only decarbonise but also adopt positive investments in the low carbon economy. The discussion last night also highlighted concerns over shareholder engagement strategies and the ‘Green Wash’ produced by some companies and investment advisors. We need more genuinely fossil free funds to invest in, not vague commitments like ‘low carbon’.

The campaign to divest from these risky and unnecessary investments is making steady progress across the country. The practical experience of funds is helping that development as are the growing number of national and local campaigns. London is showing great political leadership on this issue.
Posted by Dave Watson at 12:43 No comments: