The life, politics and ideas of James Keir Hardie, the Labour Party’s founder and first leader can be a tool for socialist political education and a spur to action in the current political era.

I paraphrase Richard Burgon MP’s words in the foreword to a new book, 'Keir Hardie and the 21st Socialist Revival’ (Luath Press), to make the point that we look back because there is so much we can learn today. The ten chapters in this book explore many aspects of Hardie’s life and ideas. From the local to the international, from children to gender inequality, not forgetting the workplace in which his ideas were forged.  In doing so, the book touches on aspects of Keir Hardie that are not widely known and show how far his ideas were ahead of his time. 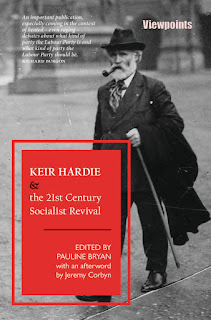 Caroline Sumpter writes about Hardie’s stories aimed at children. It may well have been his own missed childhood, as he said, “I am one of the unfortunate class who have never known what it was to be a child.”, which gave him a particular affinity for children in a time when the voice of the child was rarely heard. They responded to his call with many letters to the Labour Leader, and Hardie took up their causes in parliament. He would have been very proud of the young people taking part in the Youth Strike 4 Climate campaign this year - a new generation of his 'Labour Crusaders'.

Another unusual cause for his time was women’s suffrage. Ann Henderson’s chapter highlights that for Hardie women’s suffrage was a means to an end ", and that end is freedom, and freedom means the right to live and the means to life in exchange for the performance of some duty to the community".

Hardie's politics were rooted in that sense of community. In my chapter on municipal socialism, I highlight the 19th-century roots and Hardie's advocacy for a broader role for councils in his draft 1910 'The Local Authorities (Enabling) Act'. He would have welcomed the expansion of local government before the Second World War when municipal ownership provided 30% of council income. His ideas have found a new resonance more than a hundred years after his death in the radical political decentralisation of the current Labour Party leadership. The concept of Community Wealth Building, championed in his adopted Ayrshire, is a modern adaptation of his ideas.

Before researching my chapter, I hadn’t appreciated how far the USA in the early years of the twentieth century had adopted municipal socialism, through the sewer socialists and others. Peter Cole, in his chapter on the transatlantic connection, documents Hardie's visits to the USA and his discussions with the trade union leader Eugene Debs and his role in converting Debs to socialism. The current socialist revival in the USA, with ideas like the Green New Deal, reflect the concerns that Hardie and Debs championed in his speaking tours across that continent.

The international theme continues in Jonathan Hyslop’s chapter on Hardie as a critic of the empire. He describes Hardie's tours of India and South Africa in which he championed the causes of self-government and equal pay for black workers. Causes that were not popular in his time, but subsequently progressed. Vince Mills picks up some similar themes in his chapter on Ireland, and how Hardie viewed the importance of working-class unity across the sectarian divide.

As Hardie was above all a trade unionist, it is unsurprising that industrial issues feature strongly in the book. Sharon Graham looks at the role of precarious employment and mechanisation, issues that would be very familiar to Keir Hardie. Gordon Munro looks at similar aspects of economic justice, matching Hardie's campaigns with the commitments of the current Labour Party to radically transform the economy.

Joe Cullinane describes how Hardie came to understand that trade unions without political power were not enough. How the Liberal Party always supported the mine owners over the miners, mainly when it came to the 1887 Coal Mines Bill. He famously coined the phrase 'dumb dogs who dare not bark' to describe Lib-Lab MPs. This led to his conversion to the cause of independent Labour MPs and the founding of the Labour Party.

Richard Leonard charts the early stages of this conversion through Hardie’s columns in the Ardrossan and Saltcoats Herald. Temperance was a regular theme, and while the level of alcohol-related illness today proves Hardie right, it is perhaps a cause that has not transferred to the modern movement. In 1886 he said "If you would be successful in your struggle, shun the public house as you would the mouth of hell. It is your greatest enemy.”

In his afterword, Jeremy Corbyn reflects on the modern-day relevance of Hardie’s ideas and the causes he championed. From international relations and economic justice to political organisation and education. When the gap between the richest and poorest has never been greater he concludes; “Never has socialism been more relevant; only by providing for need not greed can we eliminate poverty and ensure sustainability of our precious planet”.

James Keir Hardie taught us much, and this book helps us understand why he is as relevant today as he was over a hundred years ago.

(you can learn more about Keir Hardie by joining the Keir Hardie Society here)
Posted by Dave Watson at 16:43 No comments: 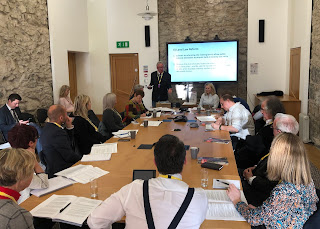 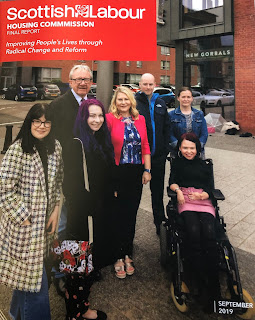 The Commission rightly emphasised the importance of developing a cross-party consensus on housing. The solutions require long-term action over several parliaments. This report is a perfect place to start that work.
Posted by Dave Watson at 12:42 No comments: