Air Traffic Control in the Highlands and Islands.

The public procurement of cutting edge technology is risky at the best of times. For a small public sector airport company to embark on such a programme during a pandemic, which is devastating the airline industry, is very risky.

Highlands and Islands Airports Limited (HIAL) are planning to radically change their Air Traffic Management System (ATMS), removing Air Traffic Control operations from several airports in the Highlands and Islands and centralising them in Inverness. Instead of having air traffic controllers on-site, they will be based in Inverness relying on communications technology to manage aeroplane movements.

I was commissioned by the trade union Prospect to undertake a procurement analysis of the proposal, which they have recently published. 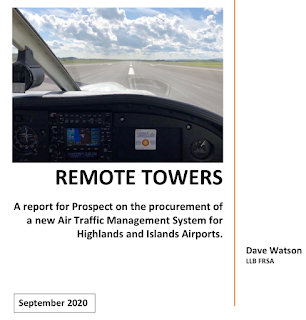 In this report, I draw attention to the many technology procurement failures in Scotland and the lessons that should be learned. These include sufficient capacity and capability, early stakeholder engagement, over-reliance on suppliers, avoiding optimism bias and cost creep. These are all identifiable concerns in the ATMS programme.
While there is significant interest worldwide in the use of Remote Towers to deliver air traffic control services, there is limited practical experience using multiple Remote Towers in the way proposed here. A range of concerns have been identified with the operation of Remote Towers including, the breakdown of data transmission systems, cyber-security, weather assessment, impact on human performance and managing the need for ratings for more than one tower in a single shift.

While the proposal will cost more, it will shift employment from fragile island communities, something that was supposed to be addressed by the Islands (S) Act. The programme will take at least £18m of economic benefit from island economies – a proportionate loss to the Glasgow economy would equate to the loss of some 800 jobs. HIAL has only recently appointed consultants to draft an islands assessment, a process which should be undertaken before decisions are made.

All the island local authorities oppose the ATMS programme. As they put it, “HIAL are putting their own priorities and dogma way above the needs of their customers and partners. Taxpayers money is being spent on a needless vanity project. It is utterly unacceptable in this day and age for a publicly funded body to behave in this high handed way’.

The ATMS programme was developed before the COVID-19 pandemic, which has had a massive impact on air travel with a 97% reduction in flights and an estimated £20 billion in lost revenue. Industry analysts all agree that a global recovery in air travel will take many years, if at all given behaviour changes. At the very least, such a significant difference in the operating environment needs to be the subject of a full, transparent, programme review. The Scottish Government should be rethinking their support for the project.
Posted by Dave Watson at 17:06 1 comment: