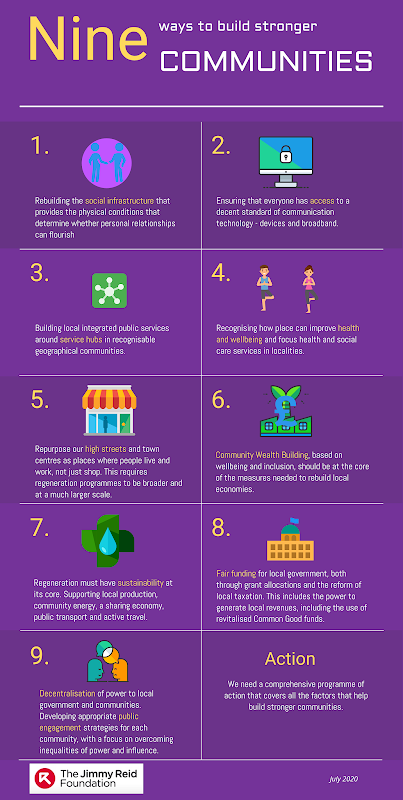 The COVID-19 Pandemic has highlighted the importance of strong communities, supporting and looking out for each other. However, strong communities do not happen by accident; they need to be nurtured and supported. In a paper published today by the Reid Foundation, I set out nine ways we can build stronger communities through a comprehensive programme of action.

Austerity has undermined many of the local institutions that bind our communities together. Cuts to our libraries, community learning, youth work, day centres and grants to voluntary organisations have all contributed to a weakening of local communities. These cuts impact adversely and more acutely on the most disadvantaged individuals, communities and groups.

A strong local economy is an important element of strong communities. Scotland’s high streets and town centres were struggling even before the pandemic with five stores a week closing. We need to rethink our town centres as places where people live and work, not just shop, although that will remain important. Community Wealth Building should be at the core of the measures needed to rebuild local economies, based on wellbeing and inclusion.

Providing better services is not enough to create stronger communities - citizens also have to be actively engaged. So, local democracy should sit alongside measures to decentralise powers and democratise the economy. A fairer Scotland where we care about each other, where people can pool their resources, demand accountability, build institutions and influence the decisions that affect them. This must include the decentralisation of power with national government to focus on setting frameworks, leaving the delivery of services to local democratic control. Local integrated services should be based around community hubs in recognisable communities of place. The pandemic has highlighted the importance of local services and the workers who deliver them - we should ‘Build Back Better’ based on the principle of subsidiarity.

It isn’t that nothing has been done about these issues in Scotland. There are many good initiatives highlighted in the paper that individually address many of the key issues. The problem is that many are small scale and process-oriented. What we need is a real focus on communities as the building block of society and a comprehensive programme of integrated support.
Posted by Dave Watson at 11:22 No comments:

Build back a better economy

Economic forecasts on the economic impact of the pandemic vary. However, they are all pretty bleak, and this emphasises the need for an effective recovery package.

There is growing support for an investment-led recovery from the pandemic based around building a more equal and green economy. I think John McDonnell is overly semantic with his criticism of the ‘Build Back Better’ campaign slogan, but he is right that this doesn’t mean going back to the old normal, and we should seek to ‘Claim the Future’. In this post, I look at some of the better ideas. 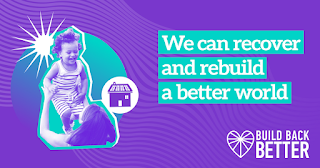 The Scottish Government’s advisory group report on economic recovery calls for a review of the fiscal framework and investment-led recovery, including ownership stakes in companies. As the STUC says, the implementation plan does not match up to the scale of the crisis, either in the scale of the investment needed and the need for a bolder Job Guarantee Scheme. This has also been the focus of Scottish Labour’s economic campaign. From a different constitutional perspective, George Kerevan wasn’t impressed either.

The Scottish Government package reflects the even weaker UK Government recovery plan. A recent Fraser of Allander study shows that than half of Scottish firms plan to make staff redundant once the UK Government's furlough scheme comes to an end. As Unite’s Steve Turner writes, “Failing to protect jobs now will never be forgiven nor forgotten.”

The Climate Emergency Response Group (CERG) has suggested eight policy packages for a green recovery in Scotland. These include a mix of short-term job creation with long-term investment while improving skills and supporting household incomes.

There is a similar UK plan from the New Economics Foundation in their report ‘Building a Green Stimulus for COVID-19’. Importantly, the projects they select are not just environmentally sustainable; they will also create large numbers of jobs rapidly. Being ‘green’ is not enough to get out of this crisis.

The Resolution Foundation has proposed a £200bn package for the UK, which is around 10% of GDP. This would be much greater than the very modest UK Government plans, and more in line with other countries. They propose investing in some very targeted ways, including:

·      A £17bn a year job support package – including extending the Job Retention Scheme for hard-hit sectors; a new Job Protection Scheme to subsidise the wages of workers returning to work in those sectors; and, job guarantees for young people.
·      A £30bn ‘High Street Voucher’ scheme – worth £500 per adult and £250 per child – to be spent in hard-hit sectors of the economy, such as face-to-face retail, hospitality and leisure.
·      An Income-Contingent Loan System – capping repayments on crisis loans at five per cent of turnover so that firms can invest and grow coming out of this crisis.
·      Trebling down on the ‘levelling up’ agenda by increasing capital investment by £14bn (rather than £5bn) in the current fiscal year.
·      Supporting low-income families with a £10 billion boost to Universal Credit.

This, like the CERG proposals, looks like a very balanced package of measures, which targets resources on areas most affected by the pandemic.

The Carnegie Trust’s six propositions for Building Back Better is a good mix of economic and social change. They support measuring national wellbeing (not just GDP), investing in digital exclusion, fair work and financial resilience. As you would expect, they emphasise the importance of local solutions, including Community Wealth Building and establishing the principle of subsidiarity in law. I have never been enthusiastic about their Enabling State concept, not least because I can remember the infamous Nicolas Ridley plan. I agree that social infrastructure is key, and I will expand on this in a paper later this month for the Reid Foundation.

Community asset ownership has not always been the success they claim, and initiatives tend to thrive in areas with high levels of social capital. Democratically accountable councils can be enablers, not gatekeepers, with the necessary powers and resources. One of the problems with driving a local economic recovery is poor data. The What Works Centre has published a useful guide to data sources.

There will be predictable responses to these ideas of who is going to pay for it. It is tempting just say what is the alternative? We know what austerity economics did last time, and now we have the ability to borrow at record low rates for investment, even if you don’t buy into Modern Monetary Economics.

If you believe we have to supplement this with other financial solutions, then look at the case for a wealth tax, or more controversially, a suggestion in a Social Market Foundation paper for a capital gains tax on primary residences. IFS researchers have shown that inherited wealth is on course to be a much more important determinant of lifetime resources for today’s young than it was for previous generations.

The UK government is consulting over an online sales tax (Amazon Tax), which could raise £2bn. While this looks like a good idea in principle, there are concerns as Prem Sikka highlights. A key issue is that this money should go to councils, not Treasury or Scottish Government coffers.

The economic recovery from the pandemic requires a new way of economic thinking. Only 6% of the public want a return to the pre-pandemic economy. We need to create an economy that puts the wellbeing of society over individual success and challenges what is valued and rewarded by the economy.
Posted by Dave Watson at 17:23 No comments: