Rethinking how to deliver budgets

Instead of just tinkering around the edges of the Scottish and UK budgets, we should radically rethink how to deliver them.

A couple of months ago I blogged about a new book by Katherine Trebeck and Jeremy Williams, 'The Economics of Arrival', which invites us to consider a future where economic progress might not mean endless growth. This involves not just changes in economic strategy but setting different budget priorities.

The authors are not naive about the political challenges such an approach entails, and so they recommend an evolutionary approach. Having a bright idea is one thing, getting a government to do it is another. However, it would appear that at least one government is prepared to make some steps in this direction.

New Zealand's Labour coalition government has unveiled its "world-first" wellbeing budget. Straight out of the 'Economics of Arrival' play sheet, the Finance Minister said many New Zealanders were not benefiting from a growing economy in their daily lives, and this year's budget had been designed to address the increasing disparity between the haves and have-nots. Budget spending is focused on long-standing problems like mental health, child poverty and sexual violence. 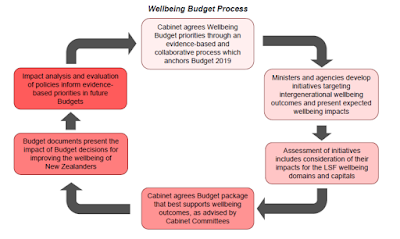 Another interesting international development is Portugal, even if not strictly in the wellbeing sense. In return for a bailout, the European Union imposed privatisations and cuts in salaries, social security and services on Portugal – what we would call 'austerity', through a centre-right Portuguese government.

A left-wing coalition government decided to take a different approach by scrapping austerity. Recently privatised companies were re-nationalised, the minimum wage rose by 20%, four national holidays were re-established, and pensions were unfrozen. There were some targeted tax cuts, although taxes went up on some luxury items.

A new report on the economic effect of these policies says it achieved a return of economic growth. This was 4.3% in 2016/2017 after falling 7.9% during the austerity measures. Unemployment fell from 17.5% in 2013 to 7.4% now and the public deficit reduced from 3.1% of GDP in 2015 to virtually zero now – the UK’s deficit is 1.9% of GDP. Prime Minister Costa told the Financial Times “We have shown that it is possible to raise incomes, lift private investment, cut unemployment and still have sound public finances.”

Of course, this is what many of us argued when austerity was implemented in the UK, but Costa has shown there really is a better way. With 14 million people in the UK locked into poverty, we could have adopted different policies. As the UN Special Rapporteur recently put it; “The imposition of austerity was an ideological project designed to radically reshape the relationship between the Government and the citizenry. UK standards of wellbeing have descended precipitately in a remarkably short period of time, as a result of deliberate policy choices made when many other options were available.” 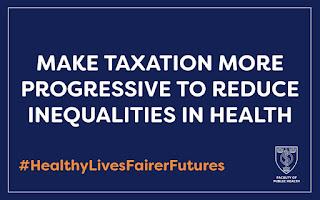 Tax is an essential element of any budget, and there has been a debate about the impact of tax on reducing inequality.  A new report by the IFS says it does have an effect in conjunction with benefits. They said: “The tax and benefit system significantly reduce the gap between rich and poor, with benefits playing a particularly big role. However, contrary to the ONS’s claim, taxes do also reduce inequality. But the bigger picture is that what matters for income inequality is the progressivity of the tax and benefit system as a whole, and not a specific part of it. The Government should achieve its desired amount of redistribution using those parts of the tax and benefit system best suited to that particular job."

So, as we start the discussion about the next UK and Scottish budgets, let's have a look at the above evidence and think about a wellbeing budget that scraps austerity and reduces inequality. All we need is a bit of political will.
Posted by Dave Watson at 17:05 No comments: