The making of a democratic economy

Progressive writers, including me, have filled libraries with polemics against austerity or neo-liberal economics. However, we have been somewhat less prolific when it comes to setting out the alternatives. What turns reactive movements into transformative ones, is to be clear what we are for as well as what we are against.

A new book by Marjorie Kelly and Ted Howard, 'The Making of a Democratic Economy' offers some alternatives. As Naomi Kline says in her foreword; "It’s not enough to imagine that another world is possible; we need to be able to picture it, experience it in miniature, feel and taste it.” 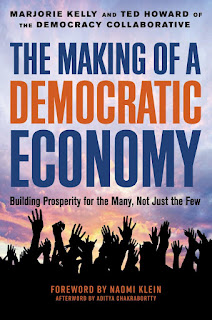 Kelly and Howard indeed start by explaining what is wrong with corporate capitalism and the task ahead. As they put it:

“This emerging democratic economy is in stark contrast to today’s extractive economy, designed for financial extraction by an elite. It’s an economy of, by, and for the 1 percent. Society long ago democratized ﻿government, but we have never democratized the economy.”

The principles of their democratic economy, in contrast to the extractive economy, include:

The meat of this book sets out practical examples that highlight the above principles, mostly from the USA and UK. From rural native American communities to areas of urban decay. For example, community wealth building in Preston, being developed in North Ayrshire and elsewhere, was based on a model in Cleveland. In that city anchor institutions built a new economy of place – less inclined to abandon their community to profit as maximising corporations did.

They don't duck the challenges. The example of a New York cooperative of home care workers faced many of the problems we have with a marketised social care system. This highlights the importance of having a government that is focused on supporting the democratic economy.

Ownership is vital in all these examples, and they include municipal, cooperatives, social enterprises and private companies. Providing new forms of finance is also critical. Labour's National Investment Bank could play an important role, together with the development of local and regional banks. There are European and US examples of how this is actually working in practice.

This is not a dry economic textbook, even if it is rooted in financial accountability and sound business systems. It is also a moral call to arms; “When we see with moral clarity, it becomes blindingly obvious that democracy is about the pursuit of happiness for everyone.”

There is an afterword by Aditya Chakrabortty, which highlights the many similar stories he has reported on in his Guardian column. Another Guardian columnist, George Monbiot, in today's paper, highlights the strategy behind 'disaster capitalism' and their political puppets like Trump, Farage and Johnson. The new oligarchs want the deconstruction of the administrative state with chaos being the new profit multiplier.

Our democracy is struggling under the new populism financed by the oligarchs. We need to find ways of democratising our economy, to shift wealth and power from the few to the many. This book doesn't just point the way, you can also 'feel and taste' what it might look like.
Posted by Dave Watson at 16:20 No comments:

The Scottish Parliament - 20 years on

On this day (1stJuly) in 1999, Westminster transferred powers to the new Scottish Parliament in the most significant act of devolution the UK has ever seen. 20 years on it is worth considering if the Scottish Parliament has achieved the hopes and aspirations that drove the devolution campaign and what more needs to be done.

Articles on the 20thAnniversary tend to fall into a rose-tinted or overly cynical commentary on the past 20 years.  For those of us used to dealing with Westminster pre-devolution, it is hard to imagine how little attention was given to Scottish issues compared with today. I, therefore, have no regrets about campaigning for devolution and I generally think it has been positive for politics and society.

However, yes you knew there would be a 'but', that doesn't put me in the rose-tinted school. A lot of attention has been given to the powers a Scottish Parliament should have, and too little on what we could do with the powers we have. Many of Scotland’s enduring challenges have been analysed, commissioned and consulted to near death, but most remain because successive governments have been too timid.

Nearly a decade of austerity has contributed to a bunker mentality in our public services, which has thankfully been spared the marketisation and fragmentation that has caused such chaos south of the border. The notable exception has been social care, where a marketised race to the bottom has created a crisis, which the Scottish Government is only applying sticking tape solutions.

This bunker means that there is a reluctance to look at radical solutions and meaningful change. An excellent example of this is the failure to implement key recommendations of the Christie Commission. In particular a shift to preventative spending and more localised public services. Instead, we have more centralisation coupled with a command and control model of public sector management.

The endless constitutional debate has not helped. A discussion that rarely considers where power rests in our society. Of course, London sucks in power and resources since Thatcher destroyed the UK’s manufacturing and primary industries, replacing them with trading financial instruments. However, even if Scotland were an independent country, London would continue to exert a massive influence on our economy. Ask the Danes about Germany.

There has been little effort to rebalance the Scottish economy. No industrial strategy worthy of the name and little concern about ownership. Even iconic and vital industries like whisky are controlled by boardrooms far from Scotland. Replacing the London establishment with the Edinburgh establishment isn’t going to achieve a fundamental shift in power and wealth. The Scottish Government’s progressive policies come to a grinding halt when the Scottish establishment feels threatened. Look at the response to proposed changes in Freedom of Information or lobbying legislation.

While political debate focuses on Brexit or Independence referenda, the real world problems mount up. Most of these relate to poverty and inequality. Over 6,000 children will need food parcels during the school holidays, many more are homeless living in temporary accommodation at best. More than 36,000 Scots are looking for somewhere to live.

In these circumstances, it is hardly surprising that the suicide rate rose 15% last year - a rate that is three times higher in disadvantaged areas. I had the odd disagreement with Kenny MacAskill when he was a minister, but he hit the nail on the head when he recently said the SNP was too focused on “identity inequality rather than wealth and land disparity”.

So, 20 years on we should celebrate the genuine achievements of the Scottish Parliament. However, we should also recognise that it has only tinkered around the edges of Scotland's enduring problems. We need to focus the powers we have to address these issues while looking at long term reform that shifts power and wealth from the few to the many. 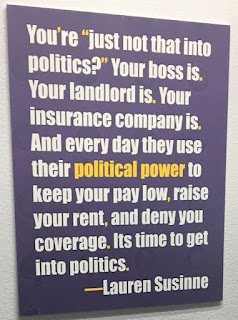