Wealth Tax in Scotland: How it can be done

Richard Leonard's proposed Wealth Tax has attracted some comment on its legality. Here is a guest post from Thompsons Partner Patrick McGuire, setting out why he believes the tax is sound in policy, principle, politics and law.

Thompsons have had some brilliant trainees over the years; some of the best (I was one myself at one point in the dim and distant past).  But even the best trainees need, well, trained; and I think the most important lesson for a new lawyer is to read the case law and think for yourself.

We all fall into the same trap at first.  We think that longer is better.  We think the answer is found in text books.  We fear offering our own opinion.  This approach can result in articulate, wide ranging pieces of work with lots of quotes.  All too often however the absolutely crucial point is barely analysed at all.

I read a blog recently on Richard Leonard’s Wealth Tax proposal that seemed to follow that approach.  It was very lengthy.  It had lots of headings.  It had a huge number of quotes from the various Scotland Acts.  It was on the face of it impressive and perhaps even convincing when it delivered the damning verdict that the Scottish Parliament could not introduce a Wealth Tax.  But when it came the key point of the key legal principle the analysis was all a bit flat and dare I say superficial.

The blog correctly identified that an Order in Council would be required under section 80B of the Scotland Act 1998 as amended.  But the author of the piece couldn’t help trying to over egg how arduous a process this would be.  Speed in fact the defining characteristic of secondary legislation such as Orders in Council.  If there is political will, there will (good that) be no problem.

The only issue is whether a Wealth Tax would breach Article 1 of Protocol 1 of the European Convention on Human Rights [A1P1].  It took the author of the blog 22 paragraphs to get to that absolutely fundamental point before summarily dismissing the Wealth Tax on the basis that taxing a minuscule [my words not his] 1% of the most wealthy’s wealth would breach their right to “peaceful enjoyment of [their] possessions”.

I think not.  I’d suggest it’s a bit more complex than that.

What constitutes a breach of A1P1 has been the subject of several decisions of our highest court.  It is those cases and the written judgements themselves to where we must turn for an answer.  I have been involved, to a greater and lesser extent, in two of the most relevant court decisions; both judgements of the UK Supreme Court.  The cases are Axa and others  v Lord Advocate [2011]; and Counsel General for Wales [2015].  Both cases related to legislation aimed at assisting victims of asbestos related disease.

The Supreme Court considered the Convention and all of the previous cases and set out a four point test that must applied to assessing whether a piece of legislation breached A1P1.  This is how Lord Mance in the Wales case described the test:

It is a question of balance - what is the benefit to society weighted against the cost to the impact on any individual affected.  This is sometimes described as the ‘proportionality test’ which comes downs to the same thing - is any negative impact proportionate to the benefits; and can the benefit be achieved by any other means.

Against that test set by the Supreme Court how does the wealth tax stack up?

(i) is there legitimate aim?  Yes - to inject a significant sum of money into the public purse in Scotland to redress the untold devastation of a decade of austerity on public services
(ii) is the measure connected to the test - yes.
(iii) could an alternative less obtrusive method be used?  There is no alternative method to the one off fiscal ‘adrenaline shot’ the Wealth Tax will provide.  A significant one off financial injection is required to entirely reshape Scotland’s welfare system and public services.  The only way this can be achieved is through a one off Wealth Tax levied against those in our society with the most wealth.  In terms of “obtrusiveness” I take the view that a levy of only 1% can not be viewed as obtrusive.
(iv) benefits v disbenefits?  The benefits are enormous.  They will change our public services for a generation.  The disbenefit is a minuscule 1% of the wealth of the most wealthy.

Against a detailed analysis of the case law I therefore have little doubt that the Wealth Tax would be legal.  Morally, I have no doubt that it is the right thing to do.  And constitutionally, if the Scottish people called for an Order in Council under s80B that  Westminster refused we would be at a crisis that no one would want or tolerate.

In summary, the Wealth Tax is sound in policy, principle, politics and law. 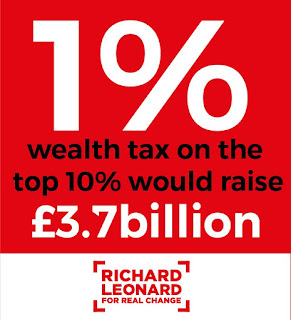