The Case for Economic Democracy

The impact of the COVID-19 pandemic on our economy will be significant, and we will need new ideas to address the consequences. While written before the pandemic, Andy Cumbers’ (University of Glasgow) new book ‘The Case for Economic Democracy’ is an important contribution to the ‘Build Back Better’ debate. 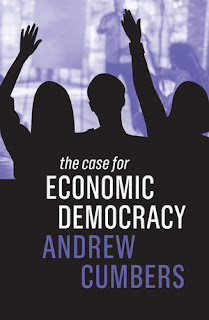 While there have been predictable calls from the lunatic economic fringe (like the Tax Dodgers Alliance) for a return to austerity, it is encouraging that such calls are not reflected, at least in the short-term, in the mainstream right-wing thinks tanks. There is a broad consensus that while interest rates remain at record low levels, governments can afford to borrow more and maintain that debt.

Others argue for more radical approaches to government debt, and the TUC and Labour have started to work up plans to work our way out of recession. History also teaches us that it is possible to build back positively from recessions.

I was particularly struck by the chart below from a briefing I was on from the Resolution Foundation, which shows how even the high levels of spending during the pandemic are only a blip in historical debt terms. 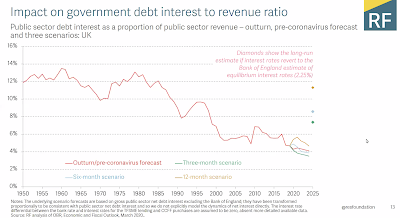 Avoiding ‘Austerity Mark 2’ is a key starting point for building a better economy, but it is not enough. Andy Cumbers explains the context of the inter-related economic, ecological and political crises:

﻿“Economically, there are widening inequalities between rich and poor, and a growing chasm between the elite billionaire class and the rest of us. Linked to this unequal and imbalanced system of global capitalism, we face an environmental catastrophe with global warming brought on by two centuries of rampant industrialization and ill-considered economic growth.”

He makes the point that we think of democracy in political rather than economic terms. Yet, who controls our economy and makes the key decisions is fundamental to our lives. ﻿ His book discusses the steps needed to move from an economy driven by narrow self-interest and greed, towards a more democratic economy, capable of serving the common good.

He starts with an analysis of the roots of the economic crisis and the history of economic democracy. He makes the link between the familiar ‘crisis of democracy’ commentary and the underlying link to global capitalism – championed not only by Thatcher, but accepted by centre-left governments as well. Aspects of this failure have been highlighted during the pandemic, but there remains a real risk that we will return to ‘business as usual’.

﻿Economic democracy is often conflated with industrial democracy, and while that is an important part of the solution, this book takes a wider view, exploring ﻿how we create a democratic economy as a more socially and ecologically sustainable alternative.


Finally, what I like about this series of books, is not just the cogent analysis, but you get a chapter on how to put the ideas into practice.

Some of these solutions are controversial, even on the left. For example, he argues that Universal Basic Income could create real economic freedoms and social empowerment, as well as raising the wages of traditionally low paid jobs and strengthening collective bargaining. Not a view shared by Iain Macwhirter (Universal Basic Poverty) this week! Others, like reducing the working week, are gaining wider support as a consequence of the pandemic.

Democratic ownership, in both public sector and cooperative forms, is another solution that should gain traction as a consequence of the pandemic. The privatisation of social care is just one example of how privatisation has been exposed. The bailouts of tax dodging companies are another. Andy draws on some of his previous work in the energy sector for other examples.

Broader forms of participatory decision making like Participatory Budgeting (PB) are welcomed while recognising that they remain on the margins of political decision making. He argues they can widen engagement to groups that have not previously participated using examples from Brazil, Ireland and Iceland. Scottish experience, so far, has struggled to avoid capture by articulate, higher-income groups.

Like me, you probably won’t agree with every idea in this book, but the central concepts are important. ﻿The good news is that polls show the form of global capitalism that currently exploits and alienates both us and the natural environment has never been less popular. This book ﻿argues for a project that enables individual economic rights and ambitions alongside collective ownership and radical democracy. That sounds like ‘building back better’ to me. 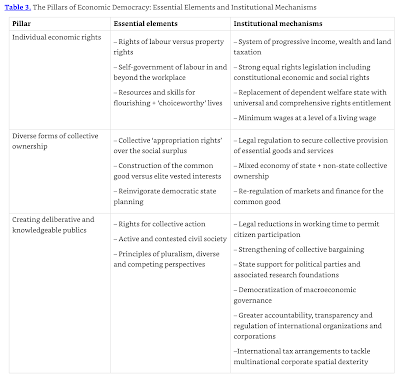