I was doing a session on public affairs at a company staff conference last week, and in the Q&A, I was asked about using opinion polls. The questioner referenced a Twitter exchange I had over a poll commissioned by Scotland in the Union and published in the Daily Record. 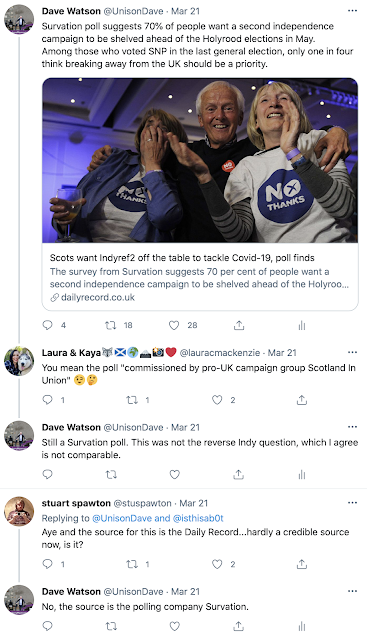 In fairness to those responding, you would get a similar reaction from Unionists to a poll published in The National.

I have commissioned many polls over the years from different polling companies. The decision to publish a poll by a newspaper will be influenced by that newspaper's editorial line. So, it's no surprise that the Daily Record chose to run this story about a poll rather than The National. However, they didn't commission the poll, so they had no influence over its results.

So, what about those commissioning the poll. Well, they do have some control over the questions asked. The Scotsman reported on another question commissioned by the same organisation. The question read: “If there was a referendum tomorrow with the question 'should Scotland remain part of the United Kingdom or leave the United Kingdom?', how would you vote?”. 47% said to remain, 37% said leave. In effect, this is the reverse of the 2014 question giving the unionist camp a positive position. This very clearly illustrates the importance of how the question is worded. Asking the 2014 question generally delivers a 50:50 outcome, as John Curtice's analysis shows. 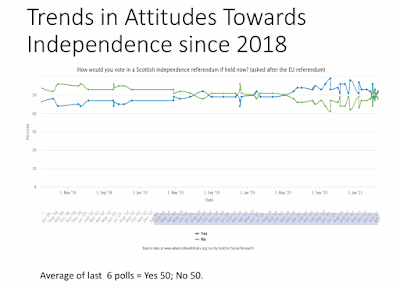 While both questions are legitimate, they are clearly not comparable, and I doubt John Curtice would include it in his poll of polls. Polling companies, in my experience, will allow some leeway over questions, not least because they will publish the question so people can make their own minds up. What they won't allow is an overly leading question, and what they certainly won't allow is any interference with the polling methods and analysis.

For campaigning purposes polls can be very useful. They can demonstrate public support for your campaign, something always likely to catch the attention of the politicians you are attempting to persuade. It may be tempting to try on a leading question, but its unlikely to be credible. The best advice is to stick to a positive but reasonably balanced series of questions, which give you a range of options when publishing.

I'll leave polling analysis to the experts. I was at a Fraser of Allander Institute event for University of Strathclyde Alumni as well last week, second rate though we may be according to Andrew Neil!  John Curtice was giving the lecture and emphasised that a single poll is only a snapshot in time. I'll leave you with his summary slide. 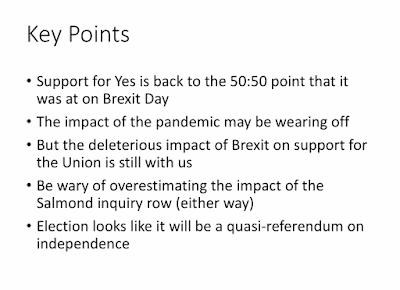