Welcome to my Blog
I am a semi-retired former Scottish trade union policy wonk, now working on a range of projects. All views are my own, not any of the organisations I work with. You can also follow me on Twitter. Or on Mastodon @unisondave. I hope you find this blog interesting and I would welcome your comments.

Austerity is killing us

Two reports published today show that the increase in life expectancy in Scotland has now stalled and that health inequalities have worsened.

One report compares life expectancy trends in Scotland to those seen internationally. The other report explores the relationship between stalling mortality improvements and socioeconomic inequalities.

The international comparative report shows that 2012-2016 life expectancies in Scotland increased by 2.5 weeks/year for females and 4.5 weeks/year for males, the smallest gains of any period since the early 1970s. The best estimate of when mortality rates changed to a slower rate of improvement in Scotland was the year to 2012 for males and the year to 2014 for females.  Among the UK countries Scotland has the lowest life expectancy, with a life expectancy 2 years lower for women, and 2.5 years lower for men than in England. 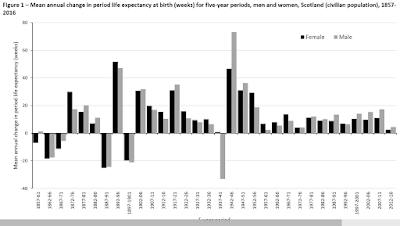 Of the 24 high-income countries for which data was available, nearly all had smaller life expectancy gains in 2012-2016 than in the immediately preceding period. Denmark is notable for having maintained mean life expectancy gains of around 10 weeks/year among females across the period 1997-2016, and even greater gains among males.

The second report concludes that as mortality improvements in Scotland stalled in 2012-2017, socioeconomic gradients in mortality became steeper. With increased mortality rates over this period in the most socioeconomically deprived fifth of the population.
This table shows what we already know and what additional information this reports gives us. 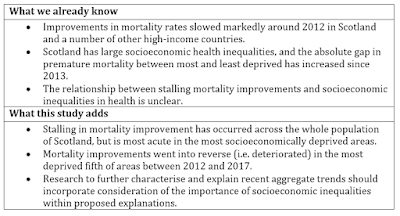 “What we see here is a worrying trend. Life expectancy not only gives an indication of how long people are likely to live, but also serves as a ‘warning light’ for the public’s health. In addition, the fact that socioeconomic position now plays a bigger role in how long you live than it did before is cause for concern.”

The question is why these figures are going in the wrong direction, bucking a long standing trend since the Second World War. Gerry suggests that austerity is the strongest factor:

“There are likely to be a number of factors at play. The strongest candidates are recent policies that address recent economic setbacks which have reduced spending on benefits, squeezed incomes and trapped people in poverty – these may all have contributed. Cuts to council budgets and pressures on key local services, such as social care, could also have had an impact. There have been some severe flu outbreaks in recent years which will have increased demands on services too.”

• Protecting budgets that determine our health, like social care, housing, benefits etc. And ensuring they are provided according to need.
• Reducing poverty for all groups and protecting the most vulnerable.
• Maximise the take up of the flu vaccine.

While pension funds may regard these figures as having something of a silver lining, they are bad news for almost everyone else. Governments and policy makers should be taking particular notice, and develop appropriate responses. Austerity isn’t just damaging the economy, it is literally killing us.