The Economics of Arrival

Every month economists and commentators pour over the Gross Domestic Product (GDP) figures, and at budget times we worry about the projections published by the Fiscal Commission and the Office of Budget Responsibility. Including those great fan charts that show the wide range of forecasts that are supposed to measure economic growth.

Since the 1930s GDP has become the primary target for government and international comparison. This has led to an era of mass consumerism and an expectation of endless GDP growth. Despite what we know about the environmental impact of growth on our finely balanced planet, the solution to all our economic and social ills is apparently even more growth.

A new book by Katherine Trebeck and Jeremy Williams, ‘The Economics of Arrival’, invites us to consider a future where economic progress might not mean endless growth. In Scotland, we know Katherine best from her work at Oxfam on the Scottish economy and the Humankind Index. This book is a natural expansion of that thinking. 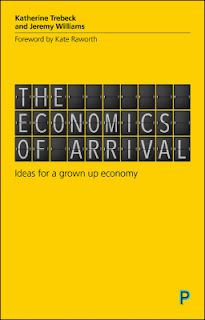 Before anyone dismisses this as anti-growth, the authors acknowledge the benefits that economic growth has delivered. In the decade to 2012, all countries accelerated their achievement in the Human Development Index. There have been dramatic reductions in child mortality and levels of poverty, common diseases are being controlled, and more children are attending school with a consequential increase in adult literacy. We live in an extraordinary age, and much has been achieved.

However, you just knew there was going to be a ‘but’! Growth on its own does not automatically help people to move out of poverty. Growth only translates into real progress when resources are shared, including on collective institutions and socially constructive purposes such as health and education.

For example, Egypt under Mubarak regularly posted growth rates of 6-7%, but 90% of the population never benefited. ﻿The United Nations Development Programme identifies different forms of negative growth. These include ‘jobless growth' that does not create employment, ‘ruthless growth' in which the rich get richer, and the poor get poorer, and ‘futureless growth' that comes at the expense of the environment.

Much of this book aims to explain how the fruits of growth are coming to an end. As we prioritise growth over security for all we are seeing an increase in the diseases of affluence, environmental degradation, and even stalling life expectancy, as the recent ScotPHO report shows. If we are in a global growth race, when do we reach the finishing line?

The authors persuasively argue that improvement in people's quality of life is not on an endless upward curve as social progress is decoupled from GDP growth. Alternative indexes show that social progress slows when countries reach middle-income status. This can drive demands for spending that equates to ‘failure demand', not dissimilar to the approach described in systems thinking.

They ask us to embrace the concept of ‘Arrival’ and making ourselves at home. Countries need to become better at focusing on the quality of the economy instead of its size - pursuing further growth risks undoing the achievements already realised. This is not a new concept. Even Adam Smith back in 1776 imagined a country that had “a full complement of riches”.

This book does not offer a new system of post-growth economics that we can switch over to. It recognises that moving to these alternatives will be an evolutionary process. There is no grand top-down vision – it is something that people and communities need to discover together.

Making ourselves at home means sharing wealth more widely, rather than permitting a few to pathologically hoard it. Getting things right the first time and so avoiding the harm and costs that come with a blinkered focus on more. Surveys tell us that we are at our happiest when socialising and engaging in meaningful activity, not when consuming.

This does require a profound cultural shift as well as an economic and political one. Practical measures might include shifting taxation from income to luxury goods, wealth, land and unearned income. Shared and better work, ending the economic reliance on unpaid work, mostly done by women. This is also where the ‘foundational economy’ can contribute, developing a circular economy, co-operatives and new business practices. All of this has to be underpinned by a vibrant and responsive democracy.

There are some examples in the book where these principles are present. Some South American countries and, perhaps surprisingly, Japan. GDP growth in Japan stopped growing in the mid-nineties, but they score highly on almost every other measure, even though they are reluctant to accept they have arrived and challenge their work-based society. ﻿Costa Rica overperforms on alternative indexes, delivering longer life expectancy and higher wellbeing than the US, but with just one-third of the ecological footprint.

Of course, there will be massive resistance to change from those who perceive that they benefit from the current system. The authors distil Meadows ‘4 Tasks' approach:

A key ingredient of change is the development of alternative measurements to GDP. There has been some work on this in Scotland and elsewhere, including the Oxfam Humankind Index for Scotland. These show that there are better ways of measuring genuine progress than a simple increase in economic activity.

No single project will change the system, but many small steps over time will. This book suggests steps for international institutions and governments. Steps for business, cities and local communities. And steps for individuals. There is no avoiding action!