With immaculate timing, Boris Johnson blunders into the devolution debate on the eve of the Scottish Conservative conference describing devolution as a "disaster north of the border". Fortunately, we have several more considered contributions to the debate in recent weeks.

The Prime Minister’s comments are, even by his own standards, bizarre. Even the UK Government's own website says, "devolution has made a real difference to the lives of people in Scotland - and recognises the wishes of the people to have more say over matters that affect them". As one veteran Scottish Tory told the BBC: "This is dire - it's totally out of touch and reflects a Westminster-centric view of 1992, not 2020”. Another said: "The anger tonight is palpable and the worst I've ever seen towards a Tory PM."

For a considered view of the constitutional question, I would recommend a paper the Jimmy Reid Foundation commissioned from Professor James Mitchell to outline and assess the constitutional options for society in Scotland from a left perspective. He argues that Scotland’s constitutional question has become stuck in a rut and the primary focus should be on the impact of proposed changes on citizens’ wellbeing. His broad international analysis points out that states and nations are artificial concepts which change and evolve; just as the UK has with its series of unions. 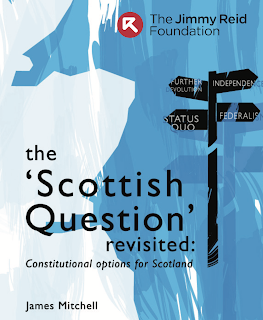 The UK’s diversity has still resulted in a highly centralised state, despite Johnson’s, and in fairness some previous prime ministers’ frustrations, at not being able to direct everything from London. James Mitchell goes on to set out the need for rules on any future referendums and the need for a new constitutional convention on how they are triggered. He argues that having more options would empower voters by increasing possibilities, encourage constructive voting allowing people to vote for first preference option rather than a least disliked option; signal views across a wider range of options; and potentially identify an underlying, and otherwise hidden consensus.

This is not the same as John Major’s recent suggestion that Westminster could agree to another referendum based on two linked votes, the first to vote on the principle of negotiations, and the second on the outcome of them. Although it does indicate some moderate Tory thinking in the light of the Brexit referendum.

As someone who is neither a unionist nor a nationalist, I am naturally attracted to James Mitchell’s argument, ever hopeful (God loves an optimist!) that a consensus could be achieved. While nationalists may be buoyed by recent opinion polls, I would argue that reflects the political case for independence. An actual referendum would also highlight the economic case, which as Laurie Macfarlane has recently argued is much weaker.

Another interesting contribution to the debate comes from Ben Thomson in his book ‘Scottish Home Rule’. He defines Home Rule as ﻿“a bilateral arrangement between one area within a nation state and the rest of that nation state. This is distinct from federalism, which represents an equal relationship between all constituent parts of a country”. This makes Home Rule a more practical option for the asymmetric UK, although he argues that it could provide a template for the UK to move towards federalism. ﻿The difference between Home Rule and devolution is that people in Scotland would know control over domestic matters is decided solely by them, and that this cannot be unilaterally overruled by Westminster and its Prime Minister. 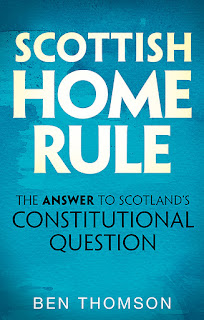 As the secretary of the Keir Hardie Society, I have to regularly explain that Hardie’s support for Home Rule is not the same as independence. He came from the Liberal tradition of Home Rule, largely focused on Ireland during his lifetime. So, I welcome a modern exposition of the concept in Thomson’s book.

Finally, Neil Findlay MSP reminds us in the media last weekend that constitutional powers have to be for a purpose – a society with social justice at its core. He makes a case for Devo-Max, the devolution of powers to the lowest possible level unless there is an overwhelming reason not to. This means that powers do not stop at Holyrood – we need to devolve power to councils, workplaces and communities.

Getting past the entrenched positions that many people take in Scotland over these issues is not easy. However, at least there is some constructive thinking on what the alternatives are.

Email ThisBlogThis!Share to TwitterShare to FacebookShare to Pinterest
Labels: Constitution