The UK Government is mired in a series of procurement scandals that go way beyond poor practice. While not on the nearly on the same scale, all is not well in Scotland either. In recent months I have completed a couple of projects that examine specific procurement programmes. Similar issues cropped up in both projects, which reflect some long-standing lessons that organisations have failed to learn.

Barely a day goes by without UK Government procurement stories being reported in the media. Some examples include:

·      Sourcing PPE from factories in China where hundreds of North Korean women have been secretly working in conditions of modern slavery. They have no days off and the North Korean state seizes 70% of their wages. It also breaches UN sanctions.

·      PPE contracts involved a £253m deal with Ayanda Capital, a London-based investment firm whose senior adviser was Andrew Mills. At the time, Mills was also an adviser to the Board of Trade. The government paid Ayanda £155m for face masks with ear loops, which could not be used by the NHS.

·      A Spanish businessman was paid more than £21m in taxpayers’ money to act as a middleman in the sale of personal protective equipment to the UK government by a Florida-based jewellery designer.

·      A contract, without a tender, paid £550,000 to the policy consultancy firm Public First for polling and focus groups. No formal contract was put in place until 5 June. The NAO found, “no documentation on the consideration of conflicts of interest, no recorded process for choosing the supplier, and no specific justification for using emergency procurement.”

·      The Ministry of Housing, Communities and Local Government (MHCLG) awarded a £600,000 research grant to a consortium whose members include a fire testing specialist whose research has been funded by Kingspan, the company that made some of the combustible foam used in Grenfell. As well as a fire engineer who has publicly opposed outright bans on combustible materials.

A National Audit Office (NAO) investigation into pandemic procurement concluded that normal standards of transparency were waived as departments awarded 8,600 contracts worth £18bn to tackle COVID-19. Deals worth £10.5bn were granted without competitive tender and companies recommended by MPs, peers and advisers were given priority. As the chart below shows, 58% of contracts value was awarded directly to a supplier. Even allowing for the urgency, this is well below the standards taxpayers have a right to expect from public procurement. An issue which is now the subject of a legal challenge from the Good Law Project. 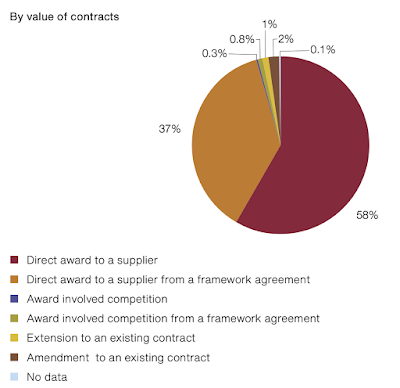 In a recent report for Prospect, I highlighted a number of poor procurement practices in the plan to centralise Highlands and Islands Air Traffic Control. In that report, I listed a range of IT procurement failures in Scotland. One of those failures was Disclosure Scotland, which is continuing to spend millions of pounds to manually deal with disclosure applications more than a year after an IT system £44 million over budget went live. The Scottish Government has also had issues with PPE procurement. The alteration of use-by dates on vital PPE equipment has raised concerns that the Scottish Government is short-changing key workers by providing out-of-date equipment.

Procurement is important because the spend generates around £10bn of economic activity for Scotland. However, too little of this spending is linked to creating jobs in Scotland, with only 100,000 jobs supported. SME’s have also long complained that they get a disproportionate amount of this spending, and the latest procurement report shows that SME’s get around 1% of total procurement spending. As Richard Leonard MSP recently said, “The SNP Government have handed billions of pounds of public money over to contracts, with little job creation and SME support in return".

I was closely involved in the development of the Procurement Reform (S) Act 2014, which attempted to use procurement as an important lever to deliver broader government objectives, including employment standards and sustainability. Progress has been made in delivering the real Living Wage in contracts, ironically one of the most contested features of the legislation. Outwith this improvement, the latest annual report is full of process and ambition, but limited hard evidence that real progress has been made.

Public procurement properly managed is an essential lever for devolved administrations to deliver their policy priorities. UK Government's pandemic procurement has been a shambles, and in Scotland, the scorecard remains at ‘could do better’.

Email ThisBlogThis!Share to TwitterShare to FacebookShare to Pinterest
Labels: Procurement