The pandemic has seen many key workers going far beyond their contract of employment to keep services running. That is particularly the case for health and care workers who have worked incredibly hard, at no small risk to themselves, to prevent the spread of the virus and treat those affected. It is time we recognised this commitment through a Health and Care Workers Covenant and that employers take action to minimise the impact on workers and their families.

Research shows that people who work in jobs like care, which are often called a calling, tend to have higher levels of resilience against the negative effects of overwork and stress and are less likely to experience burnout. However, that resilience can come at a price, both individually and for their friends and families. In a recent article, the authors argue that the families of workers in such roles also suffer massively. Called people can struggle to switch off after work and are less able to manage a balance between work and private life. Divorces and difficult relationships with children are not uncommon, as are exhausted family members. That is bad enough for the individual workers, but families shouldn't pay the price of their loved ones’ self-sacrifice.
Too many employers in the health and care sector have an operating model that depends on these workers going the extra mile. And we as a society also expect these workers to go beyond their contracts, particularly during the pandemic. They have delivered for us in challenging circumstances through governments' faltering actions and often without proper protective equipment and other safety measures. Employers have a duty of care to address this. I have recently been working with one social care organisation who have recognised this and taken a range of actions. But others take this level of commitment for granted.
NHS workers have had to deal with much larger numbers of critically ill patients than normal. Often in a far from an ideal situation, knowing this may lead to poor outcomes for their patients. This is having an impact on their mental health. A recent study of staff working in critical care during the pandemic showed they report more than twice the rate of probable post-traumatic stress disorder (PTSD) found in military veterans who’ve recently experienced combat. The authors of this study argue that there might be some lessons we can learn from PTSD in military veterans to help NHS workers cope during the pandemic. Both during the trauma and in the recovery period.
The link to the military is one made by a number of Socialist Health Association Scotland members who raised the idea of a Health and Care Workers Covenant. This is modelled on the existing Armed Forces Covenant while recognising the important differences between the groups of workers. Not least gender, insecure work and the wider range of employers and unpaid carers. Their proposal, published today, outlines and promotes the concept of a covenant. The elements could include commitments on pay and conditions, training, safety equipment, and occupational health. It should also engage the wider community as some business have already done with staff discounts. It should be taken forward as a partnership involving government, local authorities, trade unions, care providers, carer representatives and others. 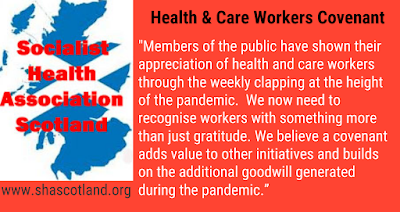 It is important to emphasise that a Health and Care Workers Covenant is not a substitute for collective bargaining and strong trade union organisation. This remains the best way to protect and improve the pay and conditions of these workers. The implementation of the Fair Work Convention recommendations, as supported by the Review of Adult Social Care, would be an important starting point.
We need to pay workers with something more than just gratitude, and a covenant is an additional way of society recognising the sacrifices these workers and their families make for us all.
Posted by Dave Watson at 16:17